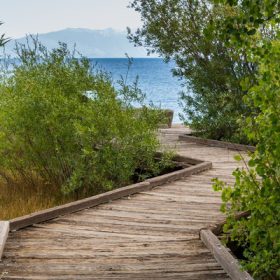 “Recreation and public access have always been a core priority for the Conservancy,” said Conservancy Board Chair Brooke Laine. “We’re anxious to explore how we can improve access for all who wish to enjoy all of Lake Tahoe’s natural wonders.”

The draft plan is available for review on the Conservancy’s website and at its offices at the address below. Members of the public may submit comments by January 28, 2019 to nick.meyer@tahoe.ca.gov or by mail to:

At the same meeting, the Board adopted a new five-year Strategic Plan. Conservancy Board and staff, partner agencies and organizations, stakeholders, and members of the public contributed to the plan’s development. Under the new plan, the Conservancy will:

The Board also authorized spending up to $484,250 to implement three high-priority projects to reduce fire risk and improve forest health: one on the California side of Van Sickle Bi-State Park, a second in the Montgomery Estates neighborhood in El Dorado County, and a third in Tahoma in Placer County. Funding for the projects comes from a 2016 Southern Nevada Public Land Management Act Round 16 Hazardous Fuels and Wildfire Prevention grant by the U.S. Bureau of Land Management.

Established in 1984, the mission of the Tahoe Conservancy is to lead California’s efforts to restore and enhance the extraordinary natural and recreational resources of the Lake Tahoe Basin. For more information, visit tahoe.ca.gov.