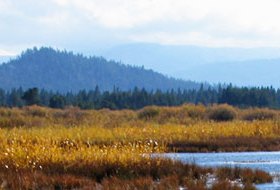 “This will be the largest restoration project in the Tahoe Basin to date,” said Conservancy Executive Director Patrick Wright. “We encourage public comment to help us shape the final plan.”

Beginning in the late 1950s, portions of the Upper Truckee River through the marsh were straightened and channelized to facilitate construction of the adjacent Tahoe Keys development. A primary goal of the draft plan is to reconnect the river with the marsh, and to restore the natural processes that filter fine sediment and other pollutants before they enter Lake Tahoe.

The Conservancy has not yet selected a preferred alternative, but will draw from public comment and features from several alternatives in crafting the final plan. Pending available funding and necessary approvals, the multi-year project could proceed to construction as early as 2015.

Public meetings and hearings on the draft plan will be held by the Conservancy, U.S. Bureau of Reclamation, and Tahoe Regional Planning Agency (TRPA) on the following dates:

Written comments will be accepted during the public meetings and throughout the review period. Public review will begin on February 7, 2013, and comments must be received no later than April 8, 2013. You do not need to attend the public meetings to comment on the document. Please submit comments via email to Scott.Carroll@tahoe.ca.gov.

Established in 1984, the mission of the Tahoe Conservancy is to lead California’s efforts to restore and enhance the extraordinary natural and recreational resources of the Lake Tahoe Basin.