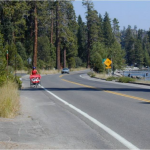 “These investments are key milestones in our efforts to develop bikeways around the lake,” said Larry Sevison, Chairman of the Conservancy Board. “They provide spectacular recreational opportunities, connect our communities, and improve the environment and economy of the Basin.”

The Conservancy granted $500,000 to the Tahoe City Public Utility District (TCPUD) to construct the Homewood Bike Trail Project, completing the West Shore Bike Trail system. TCPUD began building the West Shore Bike Trail in 1971 to provide a separated bicycle and pedestrian route along the developed portions of the West Shore. The bike trail was largely completed between Tahoma and Tahoe City by the end of that decade, except for an approximately one mile stretch in Homewood. In this stretch, bike trail users must leave the protected trail and travel along the edge of heavily traveled State Route 89, that, in some areas, has no paved shoulder. The Homewood Bike Trail Project will complete the bike trail network from Tahoe City to Sugar Pine State Park and remove a serious safety hazard. Construction is slated to begin in May 2014 and should be completed by October 2014.

The Conservancy also granted up to $500,000 to Placer County to acquire a parcel in support of the Dollar Creek Shared-Use Trail, a 2.2 mile trail that extends TCPUD’s popular, existing, 22-mile bicycle trail network. This 10-
foot wide paved trail traverses north from the terminus of TCPUD’s bicycle trail network near the crest of Dollar Hill to the end of Fulton Crescent Drive in the Old County Road neighborhood of the County. To date the Conservancy has invested more than $3 million toward design, environmental documents and right-of-way acquisitions for the gap between Dollar Hill and Kings Beach.

The Conservancy Board also approved the sale of two properties on the south shore. One is a former clubhouse and conference center site on Sherman Way adjacent to Heavenly Mountain Resort known as Tallac Vista. The Conservancy acquired this parcel in a 1988 litigation settlement that prevented the development of 150 condominiums and protected the environmentally sensitive area of the parcel. The Board acknowledged that through the elimination of the condominiums and the incorporation of a conservation easement over the majority of the property, the goals of the litigation settlement are secured in perpetuity.

The other parcel is the former drive-in movie theater site on Glenwood Way. The Conservancy recently acquired this parcel through a land exchange with the City of South Lake Tahoe. The Conservancy removed nearly 80,000 square feet of asphalt and restored the sensitive stream environment zone on the property, which also includes a potential home site on the less sensitive upland area of the parcel. Having achieved the Conservancy’s goals of removing the coverage and restoring and permanently protecting the sensitive stream zone, the Board authorized the sale of the property to recover costs and invest in other high priority projects and programs.

Established in 1984, the mission of the Conservancy is to lead California’s efforts to restore and enhance the extraordinary natural and recreational resources of the Lake Tahoe Basin.